https://www.youtube.com
When talking about Adaptive automation, there are many meanings one definition is both the user and the system can create changes in the automation level. The relationships have changed, and many think of adaptive systems as coworkers and want then to behave like humans. The definition of an adaptive system is a set of interacting entities that together can respond to changes. The growth of AR applications is increasing when it comes to training and the use of adaptive training needed in the training of users in the processing of transforming raw materials into finished goods. The complex internal process and increasing globalization of supply chain companies need real-time information exchanges at the various stages of the product lifecycle. Researchers from the University of Berkley have developed a platform that “trains” the artificial intelligence behind a physical robot, like a robot arm. Their training works by “exposing” up to a thousand objects to the AI in a virtual world, so it understands everything about them, including how to operate them. (PRAKASH, 2018) https://www.youtube.com
With the use of AR, the automation of many systems that are part of the traditional automation process can change in real-time. Changes in the state of the automation can be initiated by the AR changes or by the system themselves. Adaptive automation systems can be described as either adaptable or adaptive. (Scerbo 2001). There are many uses of self-adaptive technologies in Augmented reality interfacing. Self-adaptive systems are increasing in key areas such as medical, industrial & commercial training, serious games, rehabilitation, and remote training. Automation using AR contributes to automation of actual procedures including remote and robotic-assisted surgery and can reduce injury and improves accuracy of the procedure. Automated haptic interaction can enable telepresence and virtual artifact tactile interaction from either remote or simulated environments. Automation, machine learning, and data-driven features play an important role in providing trainee-specific individual adaptive training content. Adaptive AR training is becoming even more important. Automation with AR training can contribute to automation of actual procedures. Why is adaptive AR controls so important? When it comes to a concept to increase the automation rate in assembly tasks, problems can be easily adjusted in the use of collaborative robots, so that the benefits to humans and robots can be combined to do a task. The linking of a linked group with something like CAD models can be used as markers to reference not only the brain but also the robot. 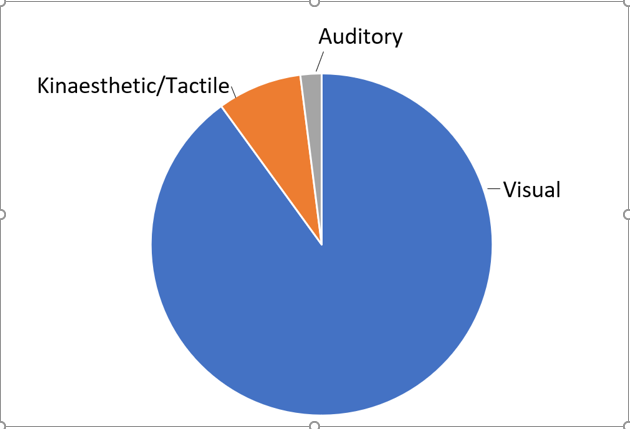 Approximately 30% of the brain is dedicated to sight; science estimates that between 80% and 90% of human sensory input is received through the eyes. Only 8% of the brain is used for touch and 2% is used for auditory processing. AR technology ensures consistency, so an unskilled workforce can think and behave in the same way as those workers with years of experience. Workforce technology is all about efficiency, consistency, repeatability, and safety, regardless of the person performing the task. With AR, every worker, regardless of language, physical capacity, or pure variability, has the ability to efficiently make the right decision over and over again. The decision-making process ensures the worker is in the right place, picking the right object, and remains focused on the next step in the task sequence. . (Seth Patin, 2019). It is important to remember that adaptive training is important when it comes to AR and VR. This training is becoming more evident as time goes on.

Seth Patin, F. a. (2019, 07 26). Automating a Workforce with Augmented Reality. Retrieved from https://www.automation.com/automation-news/article/automating-a-workforce-with-augmented-reality